Gerrymandering is the practice of drawing electoral districts to favor the election of representatives from one political party.

The term is a combination of "gerry," for Governor Elbridge Gerry of Massachusetts (early 1800s), who used redistricting to his advantage, and "salamander," the shape of some electoral districts. You can see the "salamander" in the 21st Senate District of Virginia. It splits Montgomery and Roanoke counties and the town of Christiansburg. 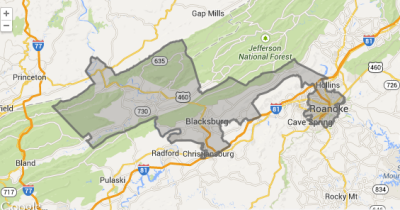 How Does Gerrymandering Happen?

Majority parties can draw the electoral districts of the state. According to Redistricting: In Search of a Better Solution, gerrymandering "allows majority-party legislators to draw enough uncompetitive districts and pick enough of their own voters to keep lopsided partisan majorities." The authors of this article, Bob Gibson and Matt Scoble, observe that "Virginia is ranked as one of the most gerrymandered states in the country both on the congressional and state levels based on lack of compactness and contiguity of its districts." Democrats and Republicans are equally at fault.

What are the Consequences of Gerrymandering?

As a consequence of gerrymandering

Will ending gerrymandering stop political gridlock? Panelists at a November 2014 LWV forum answer yes. One panelist declares that gerrymandering turns democracy on its head because politicians now choose the voters

vote411.org  information on your ballot and candidates